A survey in space and time

The architect Sarah Wrigglesworth has informed the way in which Will Knight has developed his ongoing investigations of domestic, commercial and industrial buildings through recording, measurement and drawing by hand. She comments that, 'To capture something as large as a building on the size of a piece of paper, architects work to a reduced scale, using symbols and codes to represent the world'. She has considered, as Will has, 'How to use the conventions of architectural drawings to describe space as a lived experience rather than as a static or predictable moment of perfection'.

In it's 150th year of trading, J. A Braithwaite is a family owned and run independent business, a Tea and Coffee Merchant located on Castle Street, Dundee. The project seeks to carefully record the shop's rich interior, a space that has evolved and adapted over time. The study seeks to sensitively capture the site as it is today, between it's past, and before it's future; and in doing so, to inform and enrich both. The timeline seeks to record the span of history the shop has traversed, through the prism of a single family, and business, in the context of a city, country and world.

In isolating the shop from its context through the act of drawing and writing, might we also be able to celebrate this space in isolation, as architectural form, as a stage set for life; set apart from history, politics, economics, trade and nostalgia, development and potential, and yet simultaneously and conversely, see the interior as symbolic to all of these. A product of now; a comma in time to inform and instruct in the narrative of Dundee.

Will completed his Masters in Architecture at Glasgow School of Art's Mackintosh School of Architecture in 2014. During his studies he developed his drawing and recording process through conventional architectural means, whilst also depicting space as a lived in and inhabited experience.

After graduation he worked in both commercial and creative Architectural Practices while pursuing drawing practice.

Since 2016 Will has focused exclusively on drawing projects, exhibitions and private commissions including Stravaigin Restaurant, Glasgow, and a recent residency with the Royal Drawing School at Dumfries House in Ayrshire.

Next project: → Which Wife are You? 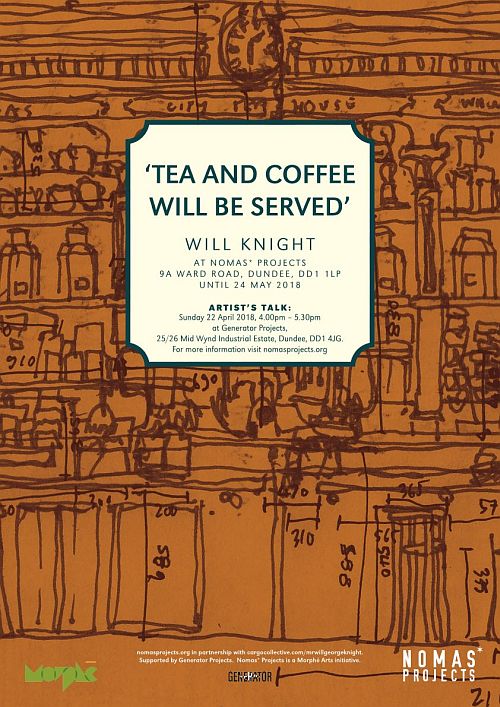