As a boy I wanted to be an astronaut, and the thrill of exploring places beyond planet earth seemed worth the risk of being strapped into the nose-cone of a gigantic rocket. I remember watching the film The Right Stuff dozens of times and admiring the courage of the characters that manned those first experiments in space travel, trusting thin membranes to protect them from the certain death of the cold vacuum of space.

The group of objects comprising Light this Candle are 1:200 scale models of NASA's Mercury Redstone 'Freedom 7', Mercury Atlas, Gemini Titan, Apollo Saturn I-B, and Apollo Saturn V rockets - the iconic vehicles of the United States' space program race to put a man on the moon, wrapped in ribbon cut from old white undershirts, and coated in beeswax. The resulting entombed objects are suspended to suggest dipped candles, or the chrysalis of strange creatures undergoing a metamorphosis, objects inevitably bound to be consumed, and experience rebirth.

Dayton Castleman is a multi-modal artist, an educator, and manages the 21c Museum in Bentonville, Arkansas. A New Orleans native, Dayton received his BA in Art from Belhaven University and his MFA in sculpture from the School of the Art Institute of Chicago. He has taught as Assistant Professor of Art in sculpture at Trinity Christian College, and as a Museum Educator at Crystal Bridges Museum of American Art. He has exhibited and presented on his artwork in venues throughout the United States and Europe.

Next project: → WOW: Argos on Mute 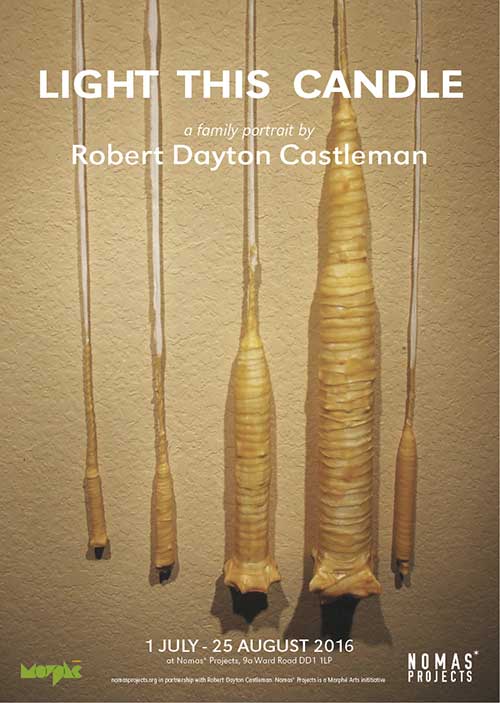