Prints and drawings from the Canadian North

In 2014 Joanna Foster was artist-in-residence at Sambaa K'e Print Studio, a printmaking facility founded by the Sambaa K'e Dene Band of Trout Lake in the Northwest Territories of Canada. Traditionally nomadic, this First Nations community live around the beautiful and vast Trout Lake (Sambaa K'e) in a remote area of Boreal forest, maintaining highly skilled hunting and craft practices that sustain their way of life. A variety of fish, wild berries, moose, caribou and beaver provide source materials for food, clothing and shelter. The lake, forest and animals hold spiritual significance for the Dene and form the subject of stories that pass forward vital knowledge about the land to future generations.

Sambaa K'e Chief Dolphus Jumbo and printmaker Carielyn Jumbo proposed the idea of a printmaking facility for Trout Lake to Gavin Renwick of the University of Alberta, who had developed a longstanding relationship with the community. In collaboration with Paul Harrison of DJCAD, and Scott Hudson of DCA Print Studio, the print facility was established in 2010. Since then the community have produced an extensive archive of work relating to the lake, the forest, and Dene culture, with the print studio becoming central to everyday life. An inclusive creative space in which all members of the community, including Elders and children, engage in a creative process that promotes community wellbeing and visually reflects an intimate relationship with the land.

Recent changes to the ecosystem of the forest and lake have resulted from invasive gas company activity, through the burning of chemicals into the atmosphere, and the practice of seismic cutlines as a way of prospecting for gas. These unnaturally straight trenches bulldoze through Boreal forest regardless of habitation, felling trees, damaging rivers and disorientating wildlife. The Dene are acutely aware of the impact of these activities on the environment and to their way of life, and are engaged in ongoing dialogue with the Canadian government to protect the land, Dene culture, and a relationship with nature that has evolved over many generations.

As witness to the urgent issues of pollution and preservation facing First Nations communities and one of the world's remaining intact forest ecosystems, the print facility increases visibility of both the Dene way of life and the land in which they live. It is hoped that the growing recognition and economy of the print studio can support nomadic practice and call for further protection of the environment in the face of encroaching commercial interests.

This was the first residency programme at Sambaa K'e Print Studio, facilitated by Gavin Renwick, and made together with two other artists Scottish printmaker Madeline Mackay and Canadian printmaker Amanda Forrest-Chan. All three artists developed a close bond with the community during the residency through creative practice. Collective drawing by the lake and a series of printmaking workshops encouraged an exchange of skills and visual dialogue. Joanna's background as a musician also prompted interest in an exchange of music and songs, and a number of music evenings were held during the residency with posters developed at the print studio. These evenings where multi-disciplinary with drawing and lino-carving taking place alongside live musical performance.

Memories of Sambaa K'e is a collection of drawings and prints made during the residency, revisiting connections to the community, the Boreal forest and the source of life that is Sambaa K'e.

Joanna Foster is an artist, musician and PhD researcher at Duncan of Jordanstone College of Art and Design. Current work explores song performance and drawing practice as conduits for connection. Joanna has developed projects using drawing, printmaking and song to explore connections between people and place for a number of arts and community engaged organisations including Cupar Arts Festival, Jiwar Arts and Society Barcelona, and Scottish Sculpture Workshop.

Puzzle-block print from the series ‘Portraits of the Elders’ J.Foster

Next project: → Light This Candle 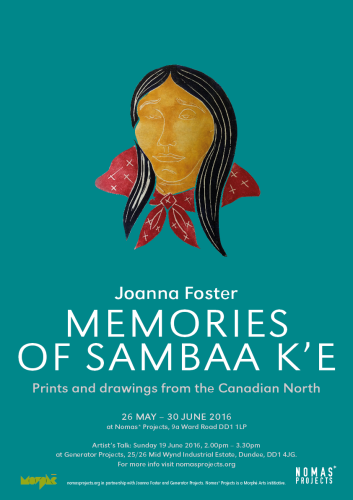