The traditional Shona society celebrates connectedness and cohesion. The society does not elevate the individual and does not see him/her as solitary and unbound. Unhu is a social philosophy that embraces the ethical values of generosity, consideration and humanity towards others and community. Mutual assistance, humility, industriousness, co-operation, hospitality, solidarity and social cohesion.

Unhu is a culmination of three separate series: Kin, Mashavi and Invocation. Each series denotes fractured aspects of self that have been carefully and slowly reintegrated into a cohesive whole. An expression of a self that is imbued with a new understanding of the significance of the collective.

Kin explores themes of belonging and is accompanied by the following text:

Kin Awareness of a systematic categorisation that leads to Disdain occurs cause “all skin folk ain’t”, affiliated, interconnected. Confrontation occurs when relations break down and Blood begets blood begets direct confrontation Are we the same? Or are we individual players Do we inhabit the same flesh? Or is that what we have been classified as Kin

This is the first time that any images from Kin have been exhibited.

Mashavi is a series of photographic images that developed out of the continuation of an ongoing project of analysis and investigation into what it means to be a practising black artist in the western art world. In Shona culture ideas of consciousness are underpinned by the concept of spirit. Wondering spirits of people who died far from home are referred to as ‘shavi’. These spirits are neither good nor bad but are able to possess the living and can influence their lives in a positive or negative way.

The word ‘Mashavi’ is the plural of shavi and indicates the presence of more than one spirit or points to a duality within the individual psyche. My undergraduate dissertation titled Blackness in Contemporary Art questioned whether blackness is a hindering factor in the creative process of artists of colour. Mashavi illustrates this question visually with the shavi (or spirit) representing a splitting of the psyche in reference to W.E.B Dubois’s notion of double consciousness.(2)

This first instalment of this ongoing series was made in collaboration with artist Bryndis Blackadder who helped me to capture the images and software engineer/designer Antanas Budvytis who helped to composite them.

Images from the series were displayed at Stills Gallery in Edinburgh and Gracefield Arts Centre in Dumfries as part of the Jill Todd Award in 2015.

They were subsequently displayed at St Andrews Museum and Kirkcaldy Museum respectively in the Ethics in Aesthetics: Living in a Material World exhibition.

Society sees black women as strong, powerful, brave, angry and difficult while failing to see their humanity or allowing for them to be seen as vulnerable, gentle, open and compassionate like their white counterparts. There are parallels that can be drawn here with the Hindu goddess Parvati and her dark aspect/incarnation of Kali. Symbolically invoking the goddess Kali in this photographic series was a way for me to bring to the fore the contradictions and inherent biases that are present in societies’ representations of black women.

Using colour, form and performative hand gestures similar to the Mudras used in yoga and meditation I intended to process these ideas through a figurative incantation. An open palm facing upwards can denote fearlessness and protection while a downward facing palm means charity and compassion. The series of photographs follow a pattern of 7 stages that form a story from the beginning of the invocation to the final meditative pose that denotes a sort of equilibrium and embodiment of peace.

This series was first exhibited at the Institute Moreira Salles in Sao Paolo Brazil in November 2018.

Sekai Machache (b.1989) is based in Dundee, Scotland. Her work is a deep interrogation of the notion of self. Having been born in Zimbabwe and raised in Scotland, she has a particular interest in W.E.B Dubois’ notion of Double Consciousness, which expresses the psychological challenge of having African heritage whilst living in the West. Working in a multi-disciplinary practice, Sekai works with a wide range of media including but not exclusive to photography. Her photographic practice is mostly formulated through digital studio based compositions utilising body paint and muted lighting conditions, to create images that appear to emerge from darkness. Sekai is a founding and organising member of the Yon Afro Collective. 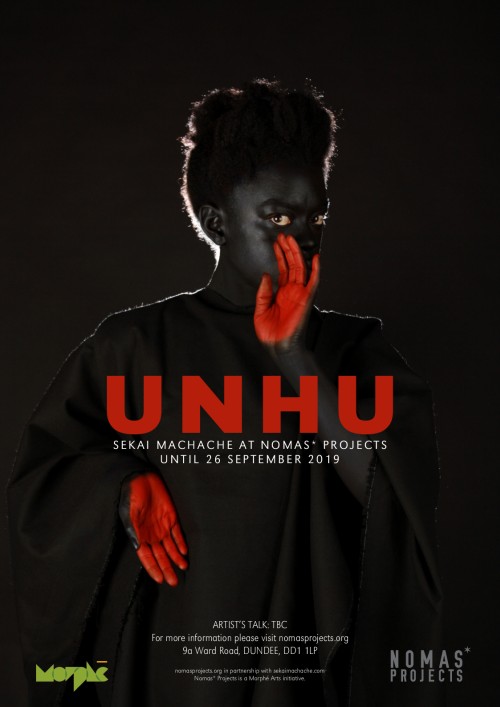