Andy Slater is primarily a painter whose canvases are awash with pattern, however his interest in form, formulae, and repetition, has led him to create multiples, using industrial processes. In this series of vignettes, he has taken to machine made embroidery, removing the hand of the artist entirely from their production.

Whilst living in New York, he noticed the graphic images of agrarian idylls that are commonly printed on food packaging, and stacked high in the aisles of the bodegas. These invented vistas were all the more stark and questionable in the context of such a dense, built environment.

Images taken from (fruit and vegetable) produce packaging were photographed in America, rehashed in Photoshop, emailed to China to be recoded for embroidery machines back in Scotland, and, once stitched onto unbleached cotton (grown in India and processed in Asia), finally framed with Scandinavian birch ply wood hoops that had been laser cut in England.

Looking back, Virgil described Arcady as an idyllic pastoral land; looking forward, was the Grecian ideal of the Elysium Plane. Henceforth, literary and pictorial representations of these have formed the imaginary of the ideal landscape and life lived in it.

From the early 1600s landscape in painting became less a backdrop and more a legitimate subject matter in its own right. Artist Claude Lorrain “opened people's’ eyes to the sublime beauty of nature”, and his pastoral landscapes set standards by which real landscapes would be judged. Later, as painters such as Gainsborough and Constable sought out, rectified, or assembled landscapes, gardeners, such as William Kent and Lancelot Brown, remodelled actual estates on the same principles to improve the composition and beauty of the site.

The majority of landscape painters of the time were concerned with capturing or creating the Picturesque, a quality that shared in the Beautiful and the Sublime. Uvedale Price wrote in his 1794 essays that the Picturesque foreground should be of smooth, undulating and well managed topography. The middleground should host figures, animals, rocks, and vegetation, which is rugged of delineation though not necessarily rough of surface; a good level of variation which can be reflected in the water is what is desired. The background should be slightly indistinct but mountainous, with a nod to the Sublime. Sudden variation, drama and mystery are the key elements of the backdrop. Thus a curious circularity developed whereby the refined version of the landscape which appeared in paintings, became the model for the landscape architect, and his work in turn became the subject of painters seeking the Picturesque.

To give such a calculus for the ideal landscape may seem absurd, but the imaginary is so deeply rooted that it continues to form and inform our conception of and our relationship with a landscape which is increasingly mediated by globalised industries. Thus such reductive imagery is sufficient enough a trigger for thoughts of fair weather and abundant produce beyond the reality of the shrink-wrapped apple.

Andy Slater (born Scotland, 1979) is currently based in Dundee, Scotland whilst maintaining a studio practice in Newcastle, as a painter. His art work deals with manipulation and control, perception and beauty, mythology and traffic islands. Through abstraction, pattern, collage, plastics and embroidery, process is an integral part of Andy’s practice. In 2013 he completed an MA in Future Landscape Imaginaries, making new paintings and vacuum formed plastic works that examine systems, protocol, and the production of space.

In 2008 he undertook a residency in New York where he completed new large-scale paintings, screenprints and embroideries based on the representations of well-known female figures in history such as Eve (with Adam), Delilah (with Samson) and Salome. In his solo show at the Star and Shadow in Newcastle, Since I Got My iPod Everything is Filmic and Beautiful (May-June 2007) he exhibited paintings drawing upon the Greek myths of Flora, Chloris and Zephyr, amongst other works which made reference to famous landscape paintings from Monet to Bruegel.

In addition to his studio work, Andy has worked in a technical or artistic capacity for venues such as BALTIC and projects including Platform North East, Star Board Home (Newcastle), and The Embassy (Edinburgh) and spent a period of time working at the Venice Biennial (Zenomap Project, Scottish Pavilion, 2003). Slater has an MA from Newcastle University, a 1st Class Hons. Degree in Fine Art from the university of Dundee and has undertaken research residencies at San Martino de Scale, Sicily, on board the MS. Stubnitz, at the Banff Centre, Canada, and at Point B, New York.

Next project: → Memories of Sambaa K'e

Previous project: ← Reflections on the Incarnation 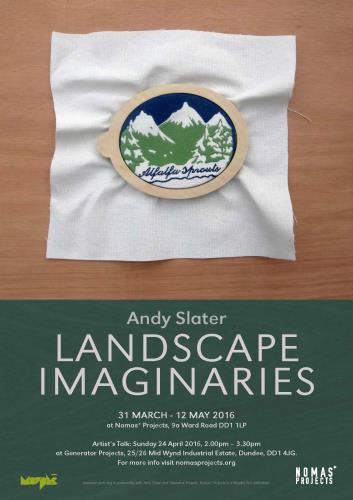